Fairfax County Public Schools (FCPS) was founded in 1870 when the Virginia General Assembly passed the Public Free Schools Act. During the 1870-71 school year, there were 41 schools in operation in FCPS. One of these schools was located in the village of Forestville, which, during the mid-20th century, was renamed Great Falls.

From 1870 until the early 1960s public schools in Fairfax County were segregated by race, because Virginia law required school districts to operate separate schools for white and black children. FCPS records indicate that by the mid-1880s there were two separate public schools in operation in the village of Forestville. The school for black children, known as the Forestville Colored School, was once located directly across Walker Road from Great Falls Elementary School. The building was constructed sometime around 1886 on a one acre lot donated by William Rowzee and his wife Clara. The school closed permanently in the early 1900s and the building was sold in 1913 to Cornelius T. Johnson.

In 1869, just prior to the founding of FCPS, a one-room schoolhouse for white children was constructed on the southeast corner of the intersection of Georgetown Pike and Walker Road. This school was referred to as the Grove School and the Oak Grove School in records from the late 1800s, and soon after FCPS was established it came under the administration of the School Trustees of Dranesville District. Very few records concerning the Oak Grove School survive, however it has been verified that Henry O. Cornwell taught there from 1886-89.

From 1870 until the mid-1930s, most FCPS students were educated in one-room schoolhouses where a single teacher worked with children in grades 1-7 all in the same room. Teachers at one-room schoolhouses, like the Oak Grove School, had significant responsibilities in regards to the upkeep of the building. There were no janitors, so teachers built and maintained a fire in a pot belly stove used to warm the building, and washed and oiled the wood floors. The daily lessons were staggered by subject and grade level, with one grade of students giving recitations while the others worked quietly at their desks.

At some one-room schools children didn’t have individual desks. They sat on long wooden benches and held their work in their lap. Before the days of ink pens and paper, children wrote with chalk on small slate boards that could be carried to and from school. There were no restrooms or running water in one-room schools. Older boys were tasked with carrying drinking water in a large bucket from a nearby well, and with carrying firewood into the building. Bathroom facilities typically consisted of a single outhouse, but in some more fortunate communities there were separate outhouses for boys and girls.

By the late 1880s, the Oak Grove School was no longer adequate to support the growing number of children living in the Forestville area. In 1889, the School Trustees of Dranesville District began construction of a new one-room schoolhouse in the village of Forestville. On September 7, 1889, the Trustees awarded the contract for the construction of the building to Mr. M. D. Remy, at a cost of $487.10. The new school was built on a one acre lot approximately 200 yards east of the Oak Grove School on the north side of Georgetown Pike. This lot was purchased from George Gunnell and his wife Alice for $50.00, and the deed was recorded on October 7, 1889. On November 2, 1889, the School Trustees inspected the new school and recorded in their minutes that it was finished and ready for use. The school became known as the Forestville School, and the building is still standing today at 9812 Georgetown Pike.

Henry O. Cornwell had the longest teaching career at the Forestville School. A wood stove, tended by the teacher, heated the Forestville School. Mary Sanders recalled that one morning when Mr. Cornwell lifted the stove lid to start a fire, a big goose rose from inside the stove, flapping its wings and spreading soot over Mr. Cornwell’s neatly attired frame. Mr. Cornwell taught “to the tune of the hickory stick.” Facing the blackboard with the light shining so that his glasses mirrored motion behind him, he noticed a student shaking his fist at him. Turning around, Mr. Cornwell rendered a good application of the stick to the fist shaker.

By Horse and Wagon

During the 1911-12 school year, a new, brick schoolhouse opened in the Floris community south of Herndon.

The new schoolhouse at Floris replaced a three-room wood frame building at the same site. During this time period, the school-age population was on the rise in several communities in Fairfax County. In July 1912, the School Trustees of Dranesville District decided against selling the three-room building, and instead directed that it be dismantled and the classrooms moved to other locations in the district. Two of the classrooms were moved by horse and wagon and attached to the one-room schoolhouses at Forestville and Vale. The third room may have been moved to the village of Dranesville and attached to the schoolhouse there.

The additional classroom allowed Forestville to operate as a “graded school” with two teachers. In a two-room graded school, the children were separated into primary (grades 1-3) and elementary (grades 4-7) classes.

From 1889 to 1901, Henry O. Cornwell taught at the Forestville School. Records indicate he was followed by Ella Adams (1901-02) and George Johnson (1902-03). In 1903, Cornwell returned to Forestville and taught at the school for another 15 years. In 1912, when the school expanded to two rooms, Mr. Cornwell was promoted to principal and he became teacher of the elementary grades. He was joined by Ella Borden who taught children in the primary classroom from 1912-18. During the 1919-20 school year, Lelia Booth was the principal and elementary classroom teacher, and Ressie Kanost was the primary classroom teacher.

During the early 20th century, John Harry Shannon, under his pen name “The Rambler,” wrote about local history in the Washington, D.C. area for the Washington Star newspaper. In May 1918, Mr. Shannon rode the electric trolley from Georgetown to Great Falls and walked to Forestville where he recorded his impression of the village schoolhouse.

The Forestville schoolhouse stands in a clump of white oaks a short way east of the crossing of the roads… a small frame building on an old foundation of ironstone and quartzite standing back from the pike in a grove of oaks, beneath which all turf and humus has been worn away by the feet of the boys and girls of that fair country. The schoolhouse is near the east edge of the village of Forestville, which has settled itself along both sides of the pike and whose homes are set in green gardens that are wide and deep.

Mr. Shannon’s articles are a treasure trove of Fairfax County history. You can read them online through the Fairfax County Public Library website. Enter the term “rambler” and search using the “entire subject field.”

The first public high schools for white children in Fairfax County began operation in the early 1900s. At this point in time, high school consisted of grades 8-11, however not every high school offered all four grades. Schools that offered only two grades (8-9) were referred to as junior high schools. In 1916, the citizens of Forestville rallied together to advocate for improved facilities and higher education for their children, and, through their persistent organized efforts, their dream became a reality six years later with the opening of Forestville Junior High School.

In addition to junior high school students, the new school at Forestville also housed children in the elementary grades. The two-room Forestville School is believed to have closed at the end of the 1921-22 school year because on July 2, 1922, the property was sold to Henry Goode for $1,075, but newspaper articles indicate the building may have remained in use as a school for one more year. The building was used as a dwelling until October 1951, when it was sold to the Great Falls Grange. In 1952-53, the building was briefly used for overflow classroom space during the construction of Great Falls Elementary School. In the second half of the 20th century, the old Forestville School housed a bank and the Great Falls Post Office. Today, the building is owned by the Fairfax County Park Authority and can be rented by the public for event purposes such as weddings and meetings. 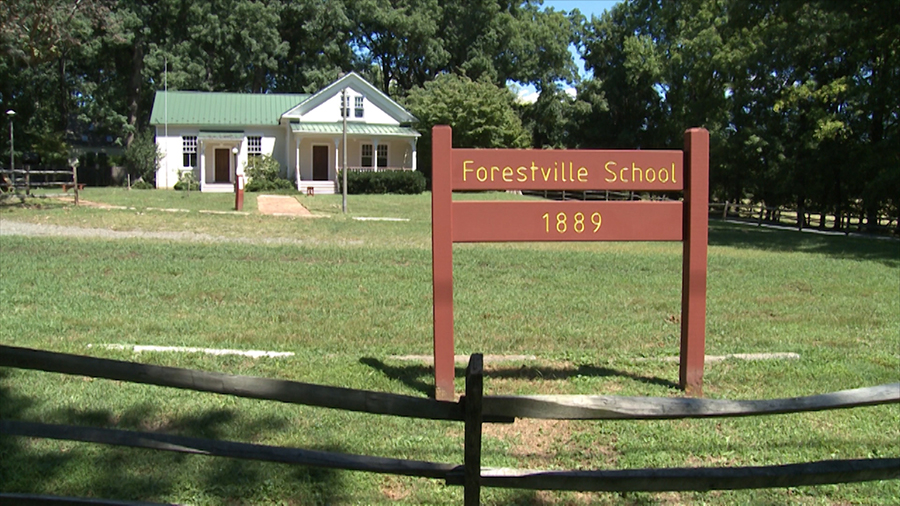